(One of my friends made the comment that O and Tre reminded her of Ginger and Black Beauty.
Oh man. They DO, don't they? Even down to the part about Black Beauty's knees and Ginger's mental issues. Who knew.)

On Wednesday, Future Hubs and I made the journey down to Austin to pick up Tre. It is NOT my usual policy to take on a horse sight unseen, but given all of the circumstances it was worth taking a chance on. I had all of the rads and a currently sound horse in front of me - and a place for her to go be a happy broodie if she doesn't stay sound - so it was worth taking a chance on. While she was smaller than I had originally anticipated (just so feminine and delicate!), she was very gentle and sweet, and was happy to let us pull her out of her stall, brush her off, put a cooler and boots on her for the trailer, and stay standing quietly in the crossties. She loaded onto my trailer fine.... aaaaand then she totally lost it. My shipping halter is too big for her, and she popped out of it a few seconds after shutting the escape door - we had to use a regular halter instead. The bouncing and pawing began as we pulled down the driveway, and she banged up a STORM for the next half-hour. We stopped for gas and left the truck parked for about 10 minutes while we ran in for some food, and we could actually see the trailer bouncing up and down from inside the store.

Thankfully, by the time we ordered our food and made it back out to the truck, she had totally quieted down. She had also completely pulled down all of her boots, so I ended up just taking them off and leaving her legs naked. She was silent the rest of the way home, thankfully.

She unloaded quietly and was pretty at peace with her surroundings. She has been in a stall for a large part of the past two years (common with show horses) and been fed spaced out meals (also common with stalled horses), so the way our setup is probably looked like heaven. 24/7 high quality slow-fed hay, 24/7 turnout, a friend to live with, no shoes and no hard grains... what more could a horse ask for? Make no mistake, my animals are athletes and they work very hard for a living, but letting them live like horses is the best thing I ever did for them. I'm *sure* the day is coming when someone will get hurt or sick, but I have not had one issue with lameness, sickness, colic, or anything else since I switched from stalling and babying my horses to letting them be who they are. To me this isn't about being a weird hippie natural horsewoman... it's about common sense. A horse is a horse... so let it be a horse. Simple as that.


Tre was super excited to be outside.... O was not quite as amused. I was not sure who would come out on top, but after some back and forth squabbling O firmly asserted herself as the alpha mare. FIRMLY. It has taken a few days, but they have finally gone from O not letting Tre anywhere near her to eating off of the same haybag... finally. They thankfully do not seem to have taken too much interest in being too good of friends, something which I hope will not change. I would rather not have two screaming attached maniacs if I can help it! 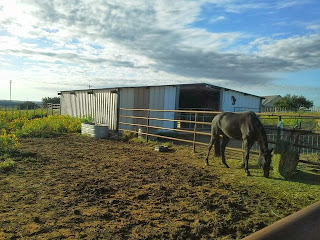 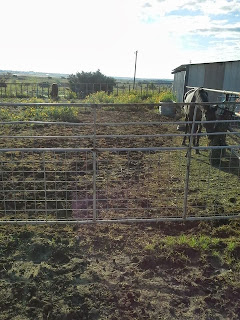 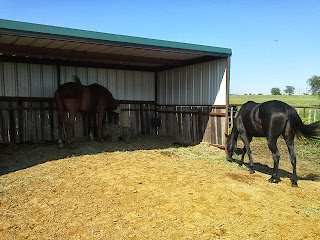 O let her eat some of the hay in the shed, after she had already pooped on it, of course.

And then they were finally friends.... and Tre let Kali know that she was NOT welcome at all! 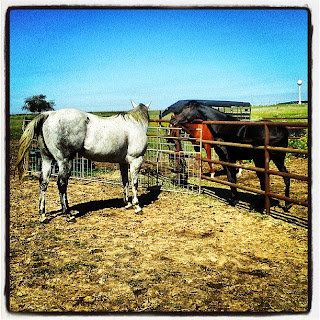 She is going to be VERY pretty once she gets muscled up. VERY pretty!

Of course, as of right now, she has no muscle at all. She is pretty darn SCRAWNY compared to big beefy O! I expect her weight to fluctuate a little bit - after all, walking around 24/7 when you were mostly in a stall before is in and of itself a HUGE increase in exercise. Having 24/7 netted forage is a huge help for getting weight on a horse, so that's at least a start... but she really, really is not a fan of our 'grainfoods.' We feed hay pellets, a pelleted fat supplement, and supplements. Since Tre was on straight Senior before (AKA candy), she is not particularly fond of switching over to the new regime (AKA raw veggies with no dressing). She ESPECIALLY does not like any of the new supplements, and also doesn't like the food to be wetted (harder to pick out the good bits, so instead she mushes all the parts she doesn't like into a glob in the bottom of the bucket and then ignoring the rest). I need to get her eating as I need her to gain some weight, but seeing as she has been living in a stall and was being fed meals, the likelihood of gastric issues is extremely high. She also smells not quite right to me... just sort of chemically and acrid. I'm hypersensitive to that smell, so I'm sure it would go unnoticed if she was with anyone else. She doesn't act like an ulcery horse in any way (except for being picky about her supplements, but that is probably just that she doesn't like them!), but the sooner I can get her fully transitioned the better. Being outside with a friend with hay all the time is huge for helping any gastric issues, no matter how small, so that is half the battle right there.

She is currently sound, very very sound in fact! She looks even better in person than she did in videos. I pulled her shoes yesterday and was pleased to see her instantly moving better, stomping around on rocks like a champ. All four feet are somewhat contracted, which isn't surprising given her exercise level, but I expect them to beef up within short order. She was very happy after her trim and went running around like a wild thing. Surely she thinks she has died and gone to heaven here!

Her rehab schedule has started with a week of handwalking, walking her over elevated poles and up and down hills to help give her hind end a head start before I get on. She thinks this is great fun and has been very agreeable and easy to handle. (She is fresh though... there is occasional leaping and rearing/striking out like a frisky colt!) She is not very fond of the Theraplate yet (scary vibrating monster) but I at least have her standing still on it at a low setting for a few minutes. On Wednesday, I will get on her and start tackwalking! 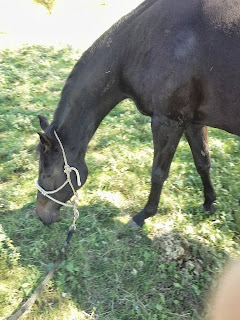 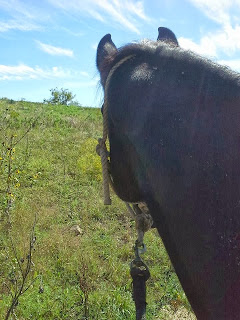 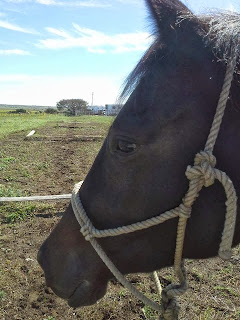 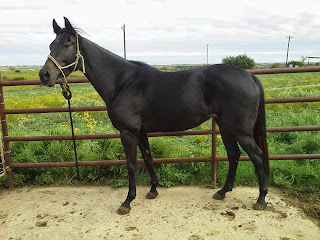 Learning to tie... she's a smart girl. Well, mostly. (I did teach her to pony on Friday... there was a lot of rearing and flailing until she figured out exactly what was going on.)