I don't get very many awards anymore, not since Gogo died, but I've been nominated for one! Hooray!


The Sunshine Award is for people who “positively and creatively inspire others in the blogosphere.” The nominee must do the following: thank the person who nominated her, nominate ten bloggers of her own, answer the ten questions given to her, and post them and the Sunshine Award button to her blog.
Thank you to The Polka-Dot Periodical (and anyone else that also did) for nominating me!

So who is nominated  As usual.... YOU! I nominate YOU if you are reading it and you haven't been nominated yet! I hate to pick and choose, you all deserve it! 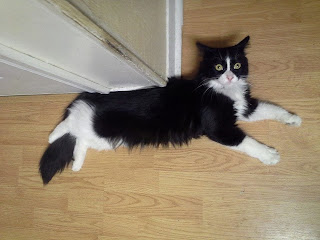 (Recognize that monster? Yes, that is the little shitten that YOU helped me rescue! He is five months old is and almost EIGHT pounds already. The vet thinks he will make 20lbs!! He'll always have a slight limp, and one leg is shorter than the other, but that doesn't stop him from leaping up on the counters and causing general chaos in the house 24/7!)

Email ThisBlogThis!Share to TwitterShare to FacebookShare to Pinterest
Labels: award