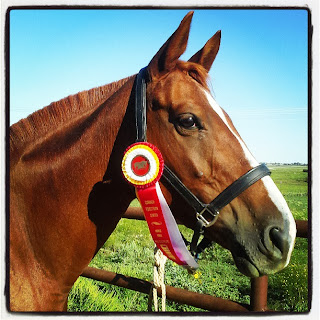 We had a pretty awesome weekend if you couldn't tell from the picture! After a not-great flatwork session on Friday (mostly she just was mentally disconnected and in need of her shot, which she then got!), I wasn't entirely sure of how the weekend would go. It's not that she was *bad* per se on Friday, she was just locked up in her back, distracted, and fussy. I finally had to trot her down the road away from her friends, and we got some halfway decent work done, but it wasn't really the fantastic final dressage school I was hoping for before the show. Oh well, it is what it is! 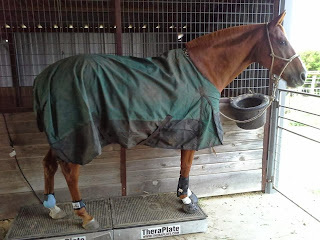 Saturday we headed out in the morning to go school XC. A cold front blew through just as I was feeding breakfast, and the temperature dropped 20 degrees - we were FREEZING! Of course it would do this the day we had to go schooling, right? O had already been over the whole course the last time we went there to school, but I wasn't about to give up an opportunity to school some more! I opted to go in the Happy Mouth snaffle, which was not quite enough in the way of brakes, but she did listen for the most part and is getting more responsive every day. Her evolution of bitting/headgear has gone from a slow or tight twist + running martingale + neck stretcher (yes, all at the same time) all the way down to just a Happy Mouth mullen mouth and no martingale at all even when jumping, which is pretty impressive in and of itself. She did super well in the Happy Mouth pelham the last time I schooled XC, so I am going to invest in one of those as well, but I'd rather do most everything in the snaffle. I fully believe that these sorts of issues all boil down to training and balance versus the illusion of control (honestly, are you REALLY going to stop your galloping beast if they REALLY want to run away with you?), but with a headstrong redhead, it does help to have a little 'excuse me hello are you listening?' reminder once in awhile.
Out on course, O was a little.... enthusiastic. She went zooming around the Elementary course with joyful glee and a bit too much in the way of zoomy speed (ok, way too much speed), but she jumped everything cleanly and smoothly, the ditch included. After we were finished with the little Elementary course (which is in its own little fenced off field away from the other XC courses - it's perfect for starters!), we headed out onto the bigger XC courses, which are across the property. I spent some time galloping around at high speed, just to blow off some steam, and jumped a few things here and there. She did have one little awkward runout at a trakehner that we approached at a funny angle, but she admittedly had been spooky at trakehners before and had not actually done one until now. After our first little run-around, she popped over it safely. For the most part, she is seriously game - she'll tackle just about everything I put in front of her, and even if there is a question the first time, she'll always do it the second time. Aside from our one very horrible jump school at WD that was linked to her chest boo-boo, she has only refused two fences in our short little jumping career together, that being one of them. That ain't half bad for a green bean! I could barely get Gogo around XC at all when we first started out, so this is pretty awesome for me. Gogo was very looky at fences, whereas O doesn't seem to really look enough.... she doesn't really care what the jump looks like, it's a jump and she's going!
We did have a lengthy talk about getting rushy to fences. There was a BN jump made of railroad ties that she was over confidence towards, and the last three strides out she was locking on and bolting towards the fence. I can't fault her enthusiasm, but I told her in no uncertain terms that her technique left a lot to be desired. After a few passes back and forth - and some I-Mean-Business halts and transitions - she curbed the enthusiasm and started paying more attention to her rhythm. We finished with some awesome schooling through the water - she still won't jump down the downbank into the water (mostly she just hasn't ever done downbanks so she has no idea what to do yet... she'll get it!), but she did figure out that cantering through the water and jumping up the bank out of the water was tons of fun. She LOVES to go splashing through the water! 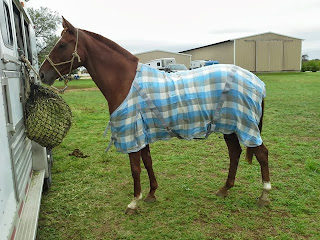 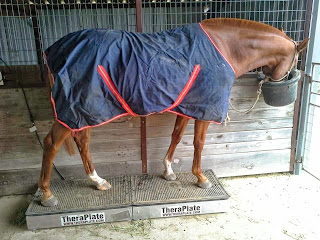 Back at home, it was cold enough that the horses stayed in their sheets. (I opted out of that giant 78" for a smaller Rambo 75" that S had.... time for some new blankets, I have a tiny horse!) A huge storm randomly blew in as we were readying for dinner, and we decided when the lightning and thunder started that we had better put them up in stalls for the night. I'm not big on stalling obviously, but in this case it was warranted. It poured for at least an hour solid - I'm glad we brought them in!!

And then, it was finally time for the show! I was a very mean mommy and gave her a bath first thing in the morning.... I couldn't help it, she was just too dirty and I couldn't handle it! Some more general tidying, fixing up of her whiskers and mane, and some time on the Theraplate, and we were ready to roll! We had a chance to walk our stadium before we got on, which was nice - my ride times were 1:21 for dressage, 1:50 for stadium, and 2:20 for XC. Not a lot of time in-between!

Our dressage was about as abysmal as I expected. She was hot and a bit tense going into it, which didn't help matters, but as expected, our first set of trotwork was fine and scored well with 7's. Our first canter? She exploded forward on the wrong lead and tried to go running off down the long side. I managed to somehow turn and get a few strides on the correct lead, somehow, but it was not good. After that disaster, she of course fired up and the test continued to fall apart from there. The rest of the trotwork was bad, just bad! The second canter she at least went right up into and managed to sort of stay cantering for most of it, but it was still so bad that the scribe actually wrote tense twice in the comments section! We had a solid set of 5's for ALL of the movements from the first canter on. We kind of redeemed ourselves with walkwork, sort of, but it was generally just a mess. I know the judge personally, so at the end of the test I laughed and told her and the scribe that I should have warned them about the canter ahead of time, but they laughed too and told me I did a good job trying to keep the cork on the whole thing. We scored a 43.0 - officially the worst dressage score I've ever gotten in my life - but I knew it was going to be about that bad, so I felt that it was a fair score. Everybody else scored about as poorly - either we all sucked, or the judge scored us very hard (she is notorious for that). Or, more likely, both things played a factor!
I'm not worried... the canter takes time. We literally just started to really work on it this week - it will come!

Our stadium was most impressive part in my opinion! I got a look at the course they had set for us and had to do a double take - was that REALLY for the Elementary folks? It was a full course of verticals and oxers (not a single crossrail... come on!), complete with tons of flowers, gates, rolltops, rollbacks and even a broken line! They were also bigger than I expected for Elementary (although they were still obviously TINY). It was far, FAR more than I have ever done with her in terms of stadium work. She warmed up well and jumped some of the bigger warmup jumps with ease, so I went into it thinking that we would probably have some green moments but it would generally go well if I just went around and trotted the thing. But, would she listen? Would she trot, or would she get the zooms and take off? Would she lose her mind?

She was AWESOME. She took an awkward spot to the first when she spent a little too much time looking at the gate (she had never seen one before!), but she listened to everything I asked. She cantered some of the fences quietly, came back to the trot when I asked, and generally just floated around like she owned it. GOOD GIRL. Her form over these little speedbumps leaves a lot to be desired, and I really need to give her some more freedom to extend her neck, but these things will improve with time. 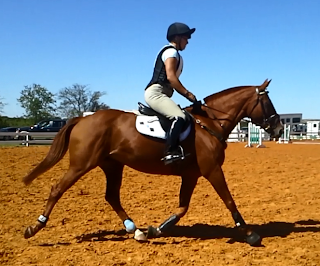 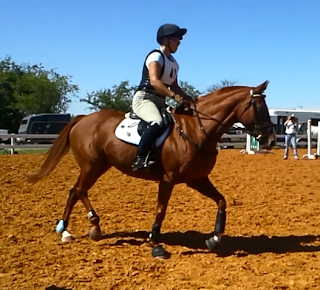 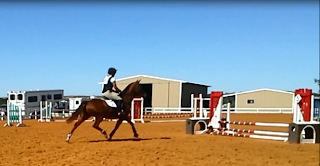 I especially like that last one... you can see how she locks on about three strides out and wants to just GO. Slow down there, wild animal!


Right after stadium was over, we went on down to the XC. As I expected, she cruised around the course foot-perfect - and she even maintained her composure and quietness for most of it! Coming home, from fence 8 to 9, she decided to get her butt in gear and take off towards it. I told her in no uncertain terms that this was not acceptable, and she shook her head as hard as she could all the way to the base of the fence. Still, we made it quietly enough, and she did the final fence of the course quietly. She was SUPER.

We completed on our dressage score of 43.0 for a second place finish!!!! :) Boy that feels good!


My big news is happening shortly.... I'll finally let you all in on it tomorrow! ;)