A strange thing happened to me the other day. I got an e-mail inquiry on O as a sale horse. She's not for sale officially, but after all, I did buy her as a turnaround project and that was supposed to be her original purpose. I told them I wouldn't take less than $10k for her and they agreed. They were finishing up selling their horse and they said they'd get back to me shortly. I didn't respond.

Earlier that morning, I had been hanging around in O's pen rubbing on her shoulder and generally just leaning on her and being a nuisance. I'm not sure what I did to make her angry, but she suddenly turned her head and gave me a very, very ugly look, complete with crinkled nose and pinned ears. She has never done that before and I was completely taken by surprise. I have no idea what I did to tick her off so royally, but she was very clear about her message. I instinctively shooed her off and got her out of my space, then went back to her and tried to figure out what exactly I had done to make her so mad. I couldn't replicate it, no matter what I did - she just kept turning to look at me with happy pricked ears, completely nonchalant. I tried to forget about it as the rest of the day wore on, but I couldn't stop thinking about it.

O is a mare who wears her heart on her sleeve. She leaves NO questions when it comes to things she likes or doesn't like, or things she does or doesn't want to do, and she'll let you know in no uncertain terms when something is amiss or bothering her. In some ways, this is a good thing - if something isn't right, she'll let you know about it immediately. In some ways, it's not good at all - if she doesn't want to do it, she's going to give you hell about it. Sometimes, I've had to be very tough about asserting and maintaining my role as lead mare in our herd of two. I've scared her half to death a time or two when I aggressively got after her about her behavior. I 100% stand behind being firm with a horse with this kind of personality - after all, that's why I got her for as cheap as I did... she was in control of everything and nobody could make her do anything that she didn't want to do! - but sometimes I forget that communication is still a two-way street. For the most part, any type of 'no' that she gives me is countered, and she changes her mind and offers back a secondary 'yes'. Over time, this has transformed her into a very solid citizen, willing and happy and quiet and sweet. When she gave me a dirty look that morning, however, I stopped and found myself asking the question "what made you do that?" instead of just immediately defaulting to "knock it off!" I realized that she had been giving me a clear message instead of just being disobedient, probably for the first time since I've had her. And for the first time since I've had her, I had enough humility to stop and ask "what did you mean by that?"

I never did figure it out. I tried to replicated it in every way that I could, but it was a one-time moment and she didn't do it again. I sent her out on the lunge that evening as dusk was falling, and realized that every time I reached over to pat her when I was leading her around, I was waiting for her to make a dirty face back. I realized some level of trust had been violated. I realized how it must feel to her when I give her a dirty rotten look for no good reason at all, on all of those days when I am tired or crabby or internalizing something that has nothing to do with her at all. I didn't understand why she had done what did had done, because there was nothing clear behind it, and I found myself lingering on how bewildering it felt. At the end of the lunge, we both stopped and looked at each other for a long moment. Whatever had been annoying her that morning had long been forgotten about, and she looked at me with her usual bright eyes. The dynamic between us changed some at that moment. I promised her that I would make sure to listen to her input a little better than I had been, but that she had to listen to mine as well. Impassive to the spoken language of humans, she flicked her ears around at me and touched me with her nose, listening instead to the sincerity in the tone of my voice. I think she knew that I meant it.

When I put her back out in her pen, I left her alone for a few minutes to finish sweeping up the barn and to shut out all of the lights. With everything suddenly in darkness, I felt my way over to paddock fence, turning around to look up at the stars for a minute and to get my bearings. My eyes focused on a tiny, slow-moving speck - a satellite. It isn't every day that you see one. As it got closer to the moon, it vanished, and I couldn't find it again. At the same time, I felt a bump on the back of my neck, and turned to find that O had left her hay to come over and hang out with me instead. She stood with her nose squashed up against me, leaning her head into my hands, dozing in the cool breeze of the early evening. I rested my chin on the fence, and she moved closer to press her forehead against mine. It was such a sincere movement - I don't think I've ever had a horse specifically put their brain against my brain like that ever before. Metro used to give big hugs with his head, but this was different. In that moment, I loved her more sincerely than I had loved anything since Gogo died. I'm not even sure I've really felt that much emotion at all since I lost her.

It seems fitting that tomorrow is the two-year anniversary since she died. 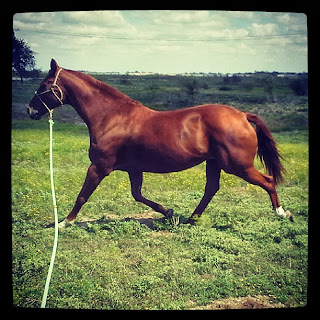 I feel tired and I miss her very much. I'll write about it more when I can gather my mind a little better. I feel a little sad and confused right now, going over the memories in my head. What a strange thing, to love and lose something that meant that much to you. It really does change everything.
Posted by Andrea at 8:18 PM