Hmmm. I may have a small problem on my hands. I have an athletic, talented red mare who is a total ATV, goes anywhere and does anything, loves to run through the water, is totally brave, is a pretty mover, and can go forever without tiring. Primo eventer material, right? Only, there is one problem... her form over fences. It just.... isn't good. At all.

I had seen videos of her freejumping as a youngster, and I had written about her not-so-great form before. I was really hoping that she would improve with time, with schoolings, with grids, with knocking into some solid XC fences a few times. I thought she was doing well.
Then I got to see the pics from the schooling show.... wow. Her form was AWFUL. Here's the VERY best one, where she kind of looks like a halfway normal horse (but this was partway over the jump... the picture taken right before it had one front leg underneath her and a knee hanging badly):

(That's the one I purchased. The rest of them I hope to never think about again!)

Hmmmm. Well, I thought, it must be me, I'm restricting her in the front.... so how about I lunge her over some XC obstacles and see how she does with that?

That was a mediocre experiment at best. She flopped, flailed, and smashed into them repeatedly. She hung knees, twisted in the air, and in general just made a total mess of herself. The bigger they got, the worse the form was.

Sigh. That is slightly depressing. She is built to do it.... but she's just not great at it. She's not AWFUL.... but she is seriously inefficient with her legs/body. If she doesn't learn to get out of her own way, it is only a matter of time before she seriously hangs a leg.

Here's the thing though... I'm disappointed in her form, but I'm not entirely upset. Why? Because she is so talented in SO many other fields, and will be SO good at so many other things! I haven't 100% decided to give up on making her into an event horse - she is such a cute mover, definitely enjoys galloping and jumping, and can't be beat in terms of bravery. I am a serious believer in not giving up on something, and that if you put in the miles the rewards will come. With more work on the canter, and more work through grids... who knows? Maybe she'll transform! But, maybe she won't. I don't really know.

What else do you do with an athletic little red mare who loves to run fast and turn sharp and go go go go go? 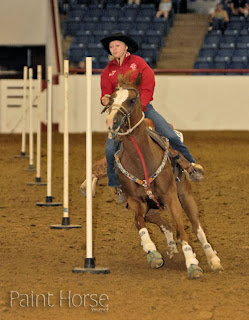 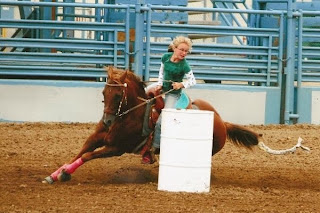 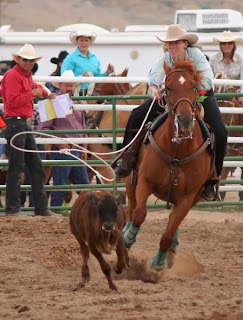 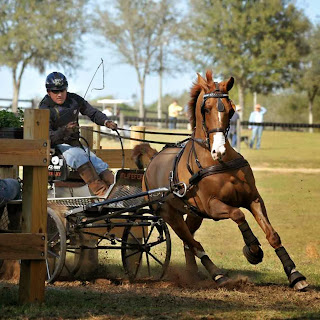 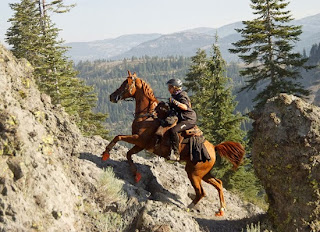 These are all things I bet she would be GREAT at. She loves to chase cows - I bet if I practiced roping some more we could do some breakaway stuff. (I don't really think it is totally ethical though... so likely not.) She thinks running barrels is the most fun thing ever! Once she gets going she will be SUPER at it. She would also be fantastic at poles, and we have barrels and poles to play with! We're not going to do the Tevis of course, but some LDs would be easy to condition for at this rate, considering how fit she already is - and who knows, maybe a 50 would be doable! Combined driving is what I REALLY think this mare would be awesome at, and what I have ALWAYS wanted to try - it's like eventing without the jumping part! Any sort of carriage sport is ridiculously expensive to get into though... I hope we can take some lessons, but as for right now I will have to stick with the ground driving. I have a client who competed in combined driving, and she told me I can come be her navigator next year!

The problem is that I have this overriding guilt about deliberately *not* aiming for the AECs when they are RIGHT here in Texas. They will only be here for two more years, and then they will go off somewhere else. If I wait, I will lose precious time.

Wait. Wait, I have a very small mare here who wants to try her hand at being an eventer! 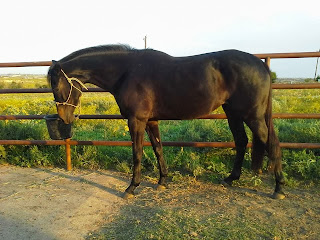 (Can you find the bot fly in the picture that was making her so upset?) 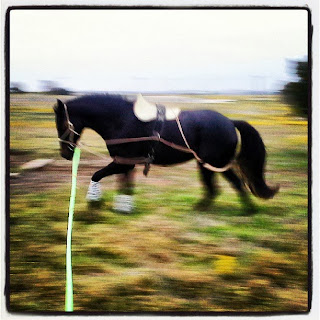 Same as O, I bought her as a sale horse, and she will sell if I find the right home... but would she not be ADORABLE as an eventer? I wish she was a hand taller, but still!

This could all work out after all!!!