Now that Tre is here, O (much to my surprise) looks like a perfect angel compared to her. Not that Tre is naughty.... I just don't know her and don't know what to expect from her all the time. I look back at O and how horrible she was that first week that I brought her home (thrashing around in the crossties, dragging me around, trying to kill me under saddle with no steering and brakes... you know the drill. She was just AWFUL!), and look at her now, and can't really believe how far she has come. She's just SO cool about everything!
I try every ride to incorporate a little dressage into everything that we do. This is a great payoff for both of us - we don't have to sacrifice fun for training, or training for fun, because we get to do both at the same time! For example: last night, we went to one of the local barrel races. S is DESPERATE to get O running (and to be honest, she'd be really good at it!), so I exhibitioned her for fun. She is patterned on the barrels, so she went trotting into the huge scary coliseum all by herself, saw the first barrel, and got right to it. (She's actually only ever seen the blue barrels before... these were brightly colored pop up barrels, but she didn't care!) The footing was very deep, so she fumbled around the third a little bit, but came galloping on home like she had been doing it her whole life. Once we were finished, we did some nice w/t work and ended on that.
Another example: last week we hacked down the road for awhile, and then decided to go check the neighbor's cows. O used to be VERY afraid of the cows, but has since gotten used to them and quite enjoys chasing them around now. S and I pushed the lot of them (41 cows/calves) into the holding pen, pushed them back out, drove them down to the stock pond, pushed them around the stock pond, and pushed them back up and into the pen again. O is more than happy to chase down breakaway calves, keep everyone together, and even run at the cranky old bull. And the best part is that we are doing dressage while we are working the cattle! Everybody wins. 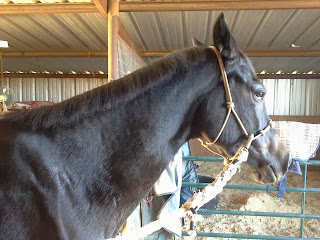 (Be proud... I resisted the urge to roach it and just pulled it instead!)


Tuesday, after a week of groundwork and walking over poles and up hills, I finally got on Miss Tre. I made sure S was around (because you just never know), but she was perfectly quiet for tacking and mounting. I walked around in the small pen for awhile, trotted a lap or two around to see how she feels (she feels a little weak all over but sound), and stood for awhile while mounted. She was perfectly quiet and agreeable. S hopped up on her big yellow horse bareback, and we went for a lap around the top part of the field (where ideally I'll be doing most of her rehab/legging up). She was forward and broke to the trot once, but behaved herself otherwise. S needed to go grab something from the barn, so I stayed up where we had been riding while she rode him away. And Tre.... Tre did not appreciate this. She pitched a little hissy fit and spent a few minutes fussing. She finally settled down into a figure-8 pattern at the walk, and was actually quite good from then on. Not exactly how I had planned on our first ride going, but there you go! In her defense, I don't know that she has ever been ridden alone, she has not been in work for several months, and she assuredly has limited out-of-arena time. It was kind of a lot of ask of her! I think she just needs more miles. I'll be riding her down closer to the barn for a little while just to get her going, and then when S gets back from being away, we'll start toodling on the trails some. (Or I will pony her off of O, but O does not like that much!)

I was going to do a lot of tackwalking to get Tre going, but honestly, the horse is sound. She looks great! She is ready to roll and she looks better and better every day. The more she moves around outside - the more she walks and eats and relaxes - the better she gets. Better and better and better! I decided to start lunging her lightly and keep an eye on her movement, but she honestly just looks GREAT. 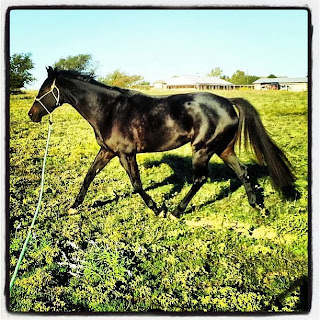 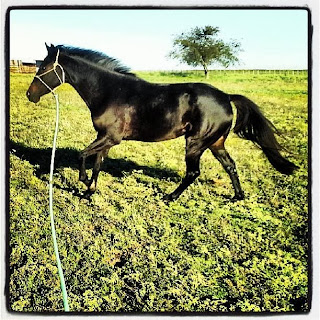 Here's a quickie link to a video her Tre lunging yesterday!

And today, I decided to put the Faux-ssoa on... and she was even BETTER! 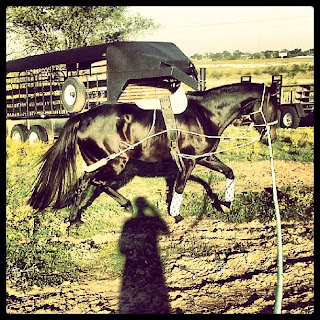 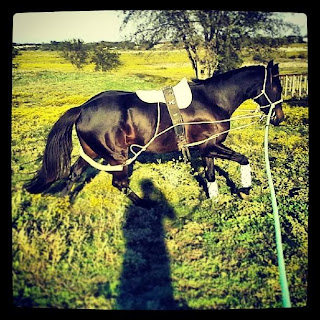 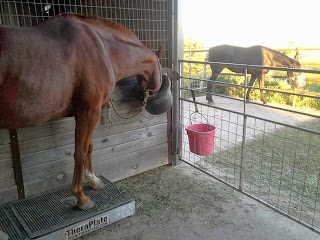 Happiness and nomnoms for all.