I finally got O out for her first real freejump since I've had her! I have a video of her freejumping (or well, running at a small jump in her field as a young horse), so I know she has technically done it before, but I wanted to get her going over some real height and see what exactly she had in her in terms of scope. I've been disappointed in her form but pleased with her enthusiasm, so it's a little bit of a toss-up.

I set the stride a little bit short in hopes that she would compress, rock back, and fold up better, but she didn't take the exercise quite how I was hoping until the very end. I set a canter pole to a xrail, then one stride to an oxer with no ground rail. Her thing is to get up close to the base of the fence and jump over her shoulder instead of fold up in front. She has plenty of scope to get over the jumps... her form isn't exactly textbook though. Next time I freejump her, I'll set the stride longer and make BIG WIDE oxers so she has to stretch for it! 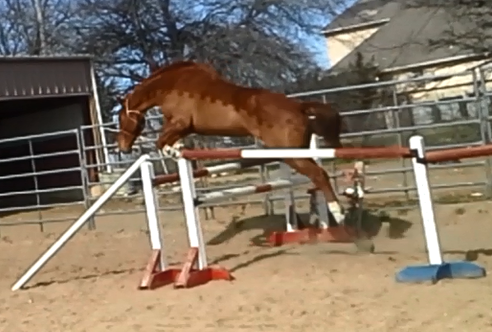 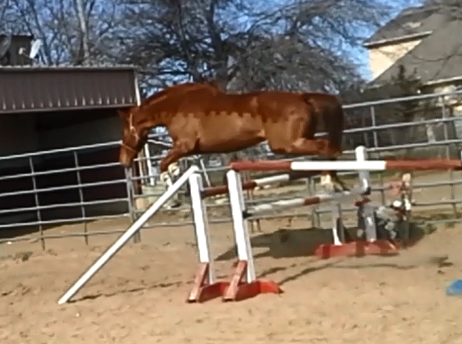 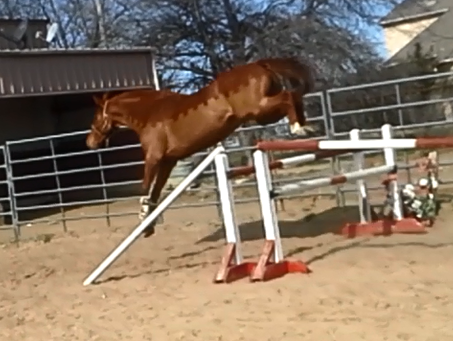 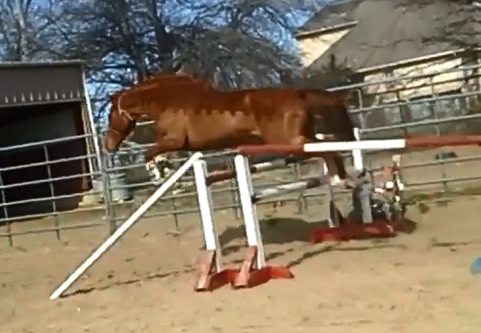 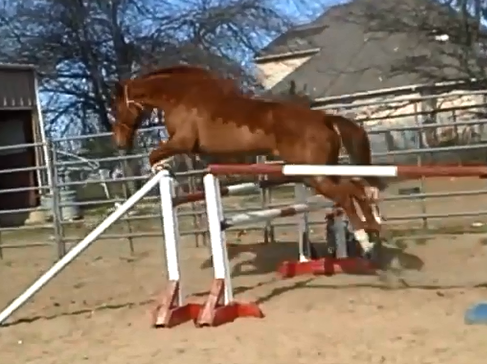 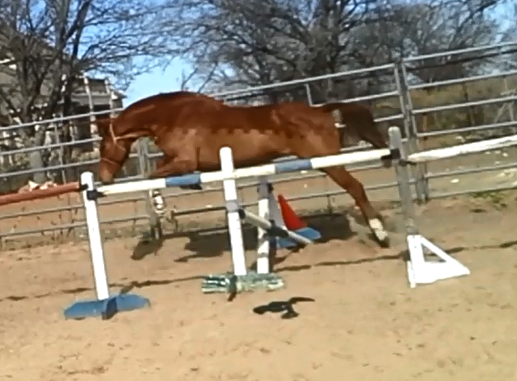 Sorry for the shaky video and crappy stills... it's a bit hard to be the lunger and the videographer! Next time I'll plan that better and set up a camera at the end of the arena instead. The oxer is about 3'9". The last time through on the video was her best effort. I really don't like how she rolls over her shoulder instead of makes an effort to snap her legs up and forward, but hopefully this will improve some.

One thing I can't fault is her enthusiasm. She took one loom at the chute and went LET'S DO THIS. She was more than happy to go through the chute, stop and look at me while I adjusted things, trot off when asked, and pick up the canter whenever she rounded the corner and the chute came into view.

Balance, balance, balance. I like the canter she has coming around the corner, but she tends to flatten out and speed up in her enthusiasm. I think the form will improve some with a very, very balanced and bouncy-ball type canter coming to every jump... and we will have to do lots and lots of gymnastics with lots and lots of oxers and bounces. The Easyshoe is about to be released as well and I'm eager to get my grubby little paws on those.... I think they're going to be a GREAT option to try on her. They might help her form out too!