Aaaaah. The red beast looks so good in her roach. I am SO glad I did it.

Further proof of the sexy: 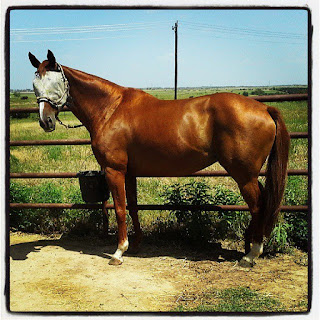 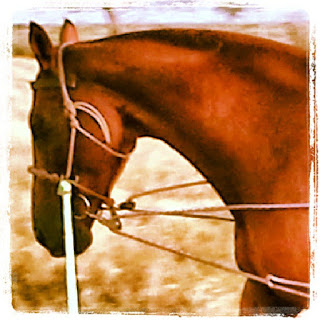 FINALLY THINGS ARE NEAT AND TIDY.

What can I say. I'm the Dolores Umbridge of grooming. 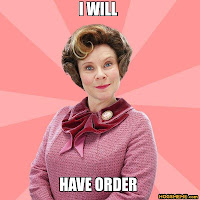 When it comes in as a bitty mohawk, I intend to keep it as a bitty mohawk. It is going to really accentuate that neck and I think it is going to look super. Unfortunately, I will then have this problem: when I go to shows, my horses wear full body sleazies (because I am THAT crazy about having them be completely clean and spotless for a show). But you CAN'T put a sleazy over a mohawk! WHAT AM I GOING TO DO!

I had a brief image of myself staying up late into the night, sewing a mane-extension pouch onto the top of my neck sleazy, a can of Monster in one hand and a needle and thread in the other. But I'm not that crazy. ............ I think.

On Thursday, I took O over to the place where I help out on weekends to use their arena and jumps. They have three arenas and a XC course so there is a lot to choose from! I had a plan for the day, but didn't get to set up all of the exercises that I was hoping due to another rider's plans in the ring (of course not a problem), so I made due with something simpler. More than anything, I just wanted to get her over a *little* something to start, just to dust off her skills and see what exactly she had going on in there. I didn't know exactly what I would find - anything can happen when you don't know the horse over fences at all!

I needn't have worried. She stepped off the trailer like a proper lady and stood quietly tied to the trailer, looking around with interest but not being wiggly or noisy. I tacked her up, took her to the arena, and warmed up - she didn't care about anything, which is very nice. She's definitely very bold, and all my hacking out and trail riding has been doing all sorts of good things for her confidence away from home - she really is EXACTLY the same horse at home and away.
Now, EXACTLY the same horse doesn't mean an angel - she's still hot, belligerent, fussy, and something outright obnoxious about things, but it's all improving. I rode her without the neck stretcher (not exactly easy to jump in those things), and picked a running martingale instead, which ticked her off until she got used to it. Once she had removed her head from my lap and had stopped trying to park trot around the arena, she settled in and had a decent ride, mostly filled with working on BRAKES and MORE BRAKES. She's been very responsive to the waterford (remember this, it will come back later), but more than anything I want her listening to my seat and body more than she does. In order to get her to listen to a half-halt or a halt, you have to basically lock up in rigor mortis before you'll get through to her. Otherwise, she keeps trucking along at 100 miles an hour, totally tuning you out. It will take time, but she'll start "hearing" the aids quicker and quicker, and will start responding faster. It's already an improvement.... before, she wasn't listening at ALL to my body, you just had to haul on the reins and hope she stopped at some point. I forget how spoiled I was with Gogo.... all I had to do was think things, and she did them. Sometimes, I instinctively did things without thinking at all, and she was almost always 100% tuned in and on board. I say "almost" because once in awhile, she'd be rearing instead of listening.... well, I guess nobody's perfect!

While simultaneously working on aids, we also worked on trotting sets of 3 poles, and trotting/cantering a single pole. Cantering a single pole was a little exciting as she wanted to rush at it right off the bat, but the trotwork was really quite good. She was consistently a little too eager in front of the sets of 3 ("THERE THEY ARE LET'S GO"), but she was listening, for the most part, when I told her that we really just needed to trot them. Once the horse is in the set of trot poles, they kind of have to adjust themselves to fit, so it sets them  up to successfully get through. Unless they are a talentless flopping fish, they usually figure it out and get it right. O, being much more talented than a flopping fish, was a quick study!

I set up a very simple little grid incorporating 3 more trot poles to a crossrail and three strides to a ground pole. It's about the most rudimentary gymnastic you can do, but it's the perfect place to start on a horse you don't know. It sets them up for the right spot and allows you to just sit chilly and let them figure it out. The first time through, O cracked her back over the little crossrail, yanked down on the bit on landing side and promptly ticked her own self off, then scooted sideways to the left out of the line. She can be touchy about the contact, so after that point I made her to give her as much freedom as I dared and stay completely out of her face. The second time through I took my leg off completely and half-halted a little too strongly, and she slowed to a walk right in front of the jump, neatly stepping right over it. Well, at least she went! Third time was the charm, and we both figured each other out - mostly what I needed to do was stay out of her face, get her at an appropriate pace before we approach (and keep that pace), and give her just a touch of leg before the jump to commit. When Gogo was a youngster, I got into the VERY bad habit of sitting and driving before every jump, because she was a bit hit and miss sometimes on XC if you weren't fully committed to the jump. She grew out of it, but I always retained the habit whenever I wasn't sure, and still feel like I want to sit and drive before jumps. If I did that on O, I feel like I probably would be lighting a stick of dynamite, so I'm sure I'll get rid of that habit PRETTY quick. This is also a mare that will be good for perfecting my not-always-great position over fences - she's not the type to tolerate mistakes, so if my leg slips or I get too in her face or I drive before a fence, I'm going to seriously tick her off and she's going to tell me about it. I better get serious!

I LOVED the feel she gave me over the jump - surprisingly round but not ridiculous, very tight and tidy, very game and willing. She's quick to unfold on the landing side, which you can see in the video of her freejumping, but as long as she's being careful and clean and safe I don't mind. I can't wait to get some video/pics of her jumping! I need an entourage to follow me around or something!

Friday, I lunged her early in the AM in the Faux-ssoa. I was a little sterner than usual concerning her speed - she wants to randomly blast forward into park trot and break into the canter, pretending like it's just soooo hard to trot. Yes, it IS hard to trot at that outrageous speed, but you are PERFECTLY capable of trotting at a normal speed, so that's the speed you need to go. Usually when she wants to canter, I make her canter until she is tired and wants to break to trot, and then make her canter for a little longer, but this doesn't work anymore with how fit she is. She can literally canter for 15-20 minutes nonstop without tiring at ALL. Instead, I'm going back and insisting she stay at the speed that I told her to go at in the first place.

We had an escapee during our workout.... Immy snuck out to supervise! 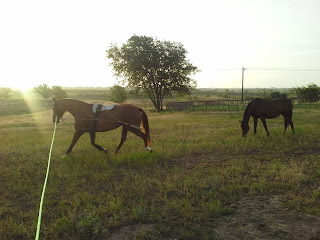 No harm no foul. She apparently just wanted to keep an eye on things. As soon as we finished, she wandered over and put her nose on me, just to make sure all was well. Even though I'm not doing much with her right now - I've been putting all the emphasis on getting O going! - Immy still is the sweetest and most gentle one of all of them, and always comes over to check in with me whenever I go into the paddock to do anything.

Today, we did something absolutely amazing... our first XC school!!! I have SO much to write about, but I need to go to BED! O's getting a well-deserved week off (if I can stay off of her that long.... maybe it will be slightly less than a week!), so I will have some time to write about everything! I can say one thing for sure, the girl has a SOLID future in eventing!